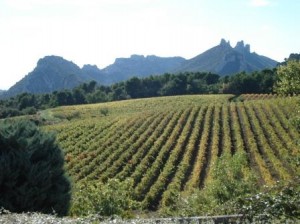 Possibly the birthplace of the Syrah vine, the steeply sloping vineyards of the Northern Rhone produce world renowned Syrah in famous appellations such as Cote Rotie and Hermitage and white wine from Viogner in Condrieu. In the flatter and warmer Southern Rhone, blends, usually anchored by Grenache are made in appellations such as Chateauneuf de Pape, Gigondas and Vacqueyras. Look out for the Cotes du Rhone Villages appellation, a distinct step up in quality from the generic Cotes du Rhone.

The Rhone River valley is situated in the south of France. It runs from Lyon in the north (just south of Burgundy), to Avignon in the south. The region is 200km long with vineyards planted on both sides of the Rhone. It is generally separated into two quite distinct viticultural regions, the Northern and Southern Rhone, separated by a large area with almost no vineyards. The Northern Rhone is smaller in area and consists of steeply sloping granite hillsides. In the south, the steep slopes give way to a broad valley floor.

The Northern Rhone has a continental climate, characterised by cold winters and warm summers, resulting in more highly acidic wines with increased ageing potential. In the Southern Rhone, the climate is Mediterranean, with hot summers, milder winters and cloudless skies. This results in fuller bodied wines generally higher in alcohol.

The differing geography between north and south means different varietals are suited. In the north, the only red varietal permitted is Syrah, while Viognier, Marsanne and Roussanne are used for white. In the south, which is more famous for blends, red varietals can include Grenache, Syrah, and Mourvedre, while whites include White Grenache, Clairette, Marsanne, Roussanne and Viognier.

Unlike Bordeaux and Burgundy, the Rhone does not have a specific classification system. However, the use of appellations does give some indication as to quality. This system is based around the Rhone’s 171 communes, or village areas.

All wine produced in these communes, that aligns to the AOC requirements, can be given the lowest AOC classification, Cotes du Rhone. These wines are generally made from Southern Rhone fruit, so are light, fruity reds made from varietals including Grenache, Mourvedre and Viogner.

95 of the 171 communes are permitted to give their wine the designation Cotes du Rhone Villages, a distinct step up in quality from Cotes du Rhone. Of these, 19 communes, or villages, are entitled to use their village name on the label as well.

There are 15 AOC within the Rhone that are named appellations, and are entitled to show only that AOC on their label rather than Cotes du Rhone. Eight of these are in the north, seven in the south.

This area produces some of the world’s most famous Syrah and Syrah blends, although AOC requirements mean they can only be blended with white wine, being Viogner, Marsanne and Roussanne, depending on the appellation. The most northerly region is Cote Rotie (literally ‘roasted slope’), which produces Syrah and Syrah Viognier blends.  Hermitage , Crozes-Hermitage and Cornas are other famous Syrah appellations. Condrieu is well known for its white, made from 100% Viognier.

The Southern Rhone is most famous for the AOC Chateauneuf du Pape, a red wine which can be a blend of up to 13 varieties, both red and white. Today the most common varietals used include Grenache, Mourvedre, Syrah and the style is replicated by GSM (Grenache, Shiraz, Mourvedre) blends in Australia. Other appellations include Gigondas and Vacqueyras (both primarily Grenache blends). Tavel AOC is the only appellation solely dedicated to the production of rose.

The AOC Muscat Beaumes-de-Venise makes the well known Muscat de Beaumes, a naturally sweet fortified wine (vin doux naturel), these wines are also made under the Rasteau AOC. There are five other appellations outside the main Rhone wine growing regions that are administered by the area. 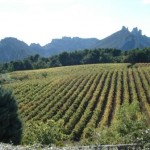 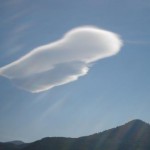 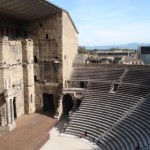